The Daughter of River Valley by Victoria Cornwall Beth Jago appears to have the idyllic life, she has a trade to earn a living and a cottage of her own in Cornwall’s beautiful River Valley. Yet appearances can be deceptive … Beth has a secret. Since inheriting her […]

Oh, Crumbs by Kathryn Freeman Sometimes life just takes the biscuit … Abby Spencer knows she can come across as an airhead – she talks too much and is a bit of a klutz – but there’s more to her than that. Though she sacrificed her career to […]

Barnabas Tew and the Case of the Missing Scarab by Columbkill Noonan Barnabas Tew, a detective in Victorian London, is having a hard time making a name for himself, probably because most of his clients end up dead before he can solve their cases. His luck is about […]

The Secrets of Villa Rosso by Linn B Halton Some places stay with you forever… When Ellie Maddison is sent on a business trip to Southern Italy, she’s reminded why she loves her job – set amongst rolling vineyards and rich olive groves, the beautiful Villa Rosso is […]

Undeclared by Jen Frederick For four years, Grace Sullivan wrote to a Marine she never met, and fell in love. But when his deployment ended, so did the letters. Ever since that day, Grace has been coasting, academically and emotionally. The one thing she’s decided? No way is […]

An Artisan Lovestyle – Kiltie Jackson Are you ‘living’ your life or just living your life? Elsa Clairmont was widowed barely five years after marrying her childhood sweetheart. She has struggled to come to terms with the loss and, six years later, has almost ceased to live herself. […]

If You Love Me, I’m Yours : Blog Tour

If You Love Me, I’m Yours by Lizzie Chantree Maud didn’t mind being boring, not really. She had a sensible job, clothes, and love life… if you counted an overbearing ex who had thanked her, rolled over and was snoring before she even realised he’d begun! She could […] 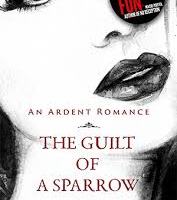 The Guilt of a Sparrow : Blog tour

The Guilt of a Sparrow by Jess B Moore Magnolia Porter has spent the entirety of her twenty-four years satisfying her mother’s guilt.  She was the good girl to her trouble making brother, Lucian.  She was the one left behind to hold her mother together after her brother […]

The Letter: Kitty’s Story by Eliza J Scott Thirty-four-year-old Kitty Bennett is trapped in a loveless marriage to criminal barrister, Dan, who’s gradually isolated her from her family and friends. Until the day she (literally) bumps into her first love, the handsome and easy-going Ollie Cartwright – someone […]