The Guilt of a Sparrow : Blog tour

The Guilt of a Sparrow by Jess B Moore 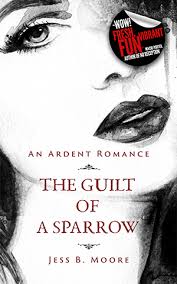 Magnolia Porter has spent the entirety of her twenty-four years satisfying her mother’s guilt.  She was the good girl to her trouble making brother, Lucian.  She was the one left behind to hold her mother together after her brother died.  She is an invisible girl in a small town carrying the burden of her family’s loss and pain.  She was nobody trying desperately to be somebody.

Cotton MacKenna is the one with the temper.  Of the five MacKenna boys, he’s the one most likely to throw the first punch.  Never mind all those fights were a decade prior, all in an attempt to save a sweet girl from her bullying older brother.  Cotton has grown up, has his own photography business, is the fourth in the line of McKenna’s, and would only ever be known for his past.

Maggie and Cotton are more than the labels placed on them.  Put there by their families, the town, and themselves.

Time for a change.

A meddling best friend.  Bluegrass jams.  Small town gossip.  Love, loss, and family ties.  Learning how to be who you are outside of who you were told to be.  With humor and plenty of romance, of course.

Whatever else I may read before 2019, this book is already on my 2018 Books of the Year list. I was gripped from page one, couldn’t put it down, and yes, I stayed up all night to read it in one sitting.

I was drawn to Maggie and Cotton, and flooded with compassion for two characters struggling to break free from behind the walls they have built to protect themselves. It is a beautifully nuanced journey about personality and character, dealing with the past, and overcoming the perceptions of family and community regarding who and what you are, as well as love, romance, and overwhelming emotions.

Families are supposed to be the rock-solid foundation from which a child grows into a confident and well-adjusted adult, and communities are supposed to protect and help its citizens as they do this. The reality is far from the ideal. Incidents from childhood and adolescence can lead to us being ‘stuck’ in patterns of behaviour which can vary depending on the people whose company we are in, or the circumstances within which we find ourselves. The psychological aspects of how families and communities function and behave influences all members, and particularly so in small communities. The need to conform to societal ‘norms’ within a given family or community is strong, as is the reaction to any deviancy from those ‘norms’. Living and growing up in a place where other people’s opinions colour who and what you are, without ever knowing the reality, can mean years of raising barriers and building walls, or being unable to escape the behaviour patterns. Irrespective of how invisible you try to make yourself, or how you behave today. You are ‘stuck’.

What if, as you grow up, you are pigeon-holed as violent and aggressive? What if over the years you come to believe it?

And what if the behaviour of your family tars you with the same brush? What if you have spent a decade hiding from that?

How can anyone escape from beneath those burdens?

Maggie tells us that, ‘we all had our reasons for becoming who we were; for staying that way.’ The author takes us behind the barriers that Maggie and Cotton have built, to uncover the reality unseen by almost everyone else. Whilst these two people have so much in common, their respective families are poles apart. Maggie’s brother Lucien was a badly behaved child who grew into a bullying violent, teenager and young man.  When the book opens Lucien is dead, but his legacy hangs around Maggie like an albatross. Her mother is controlling and unpleasant, monitors and comments negatively on Maggie’s behaviour, yet we find out later that her own behaviour leaves much to be desired. She blames others for her son’s behaviour and death, including the MacKenna family, particularly Cotton.

Maggie is sweet and unassuming. At first I thought she was going to be a loveable but pathetic creature however, as her story unfolded, I was overjoyed to find I was wrong. Cotton was also a surprise. Seemingly moody and rude, any reader could be forgiven for wondering how he could be our ‘hero’ as he is described by Maggie as ‘all hard lines and no excuses. He was the scary one‘. She corrects herself , ‘no not scary. Intense. Which is sometimes the same thing.‘ As brick by brick, the author gradually knocks down the walls that each character has built around themselves, like butterflies emerging from the chrysalis, we are presented with an amazing young woman who is stronger and braver than she realises, and a young man who is honourable and principled.

Maggie’s friend Alyssa is a real tour de force and I loved her. She manages to persuade Maggie to get out and about, and it is through her that Maggie goes to the weekly Bluegrass jam. Dominic is a delight, and his plotting and manoeuvring is amusing. I could go on at length about the story and the characters, the scene setting and the overwhelming sense that I know these people, but this is a novel that requires the reader to experience each gradual move, step, and challenge that both Maggie and Cotton encounter. To meet for themselves the truly wonderful characters who entertain and amuse us, annoy and irritate. To give any detail would be to deprive you of a great reading experience, and I can’t do that. I skipped no pages, every age was read in full, and from me that’s says a great deal about this book.

The romance is gripping and powerful as Maggie and Cotton struggle to overcome the labels that have been stamped upon them and the consequences those labels have produced.. There is nothing salacious in the overwhelming emotions that envelope Maggie and Cotton.  Jess’ use of language and her descriptive prowess range from the hilarious to the downright beautiful. She has written passages that make every nerve quiver with anticipation, and others that will have you laughing out loud. She has created characters riven with flaws and a complexity of issues, yet they are warm, compassionate, and true to life. There are no cardboard cut-outs in this romance. No-one is dialling in their part.

The Guilt of a Sparrow is a wonderful book, full of hilarious moments and heartbreaking ones, great victories and small defeats. For this to be a debut novel is outstanding. It is compelling and uplifting, and while I couldn’t wait to get to the ‘grand finale’, I didn’t want the story to end either. I know I will read it again, and I rarely read books a second time.

The scene has been set for the other characters to have their own books — potentially. I want to know what happens with Dominic. What about Denver? And Beau? What happens with Alyssa? After that, can we revisit Maggie and Cotton further down the line? I hope so.

This has the full five-star treatment with a cherry on top! Read it. Enjoy it. Love it.

Brought to you via

Fierce Grace by Jess B Moore

In Fierce Grace you will revisit the town of Fox River, NC and a few of the characters from The Guilt of a Sparrow – but this is a stand alone novel with all new characters introduced as well.