Cupid F*cks Up by Paula Houseman

Ruth Roth is a straight shooter. Pity Cupid’s not.

Smart-mouth Ruth is an inspirational humour columnist for a popular women’s magazine. Recently divorced, she has found the love of her life. Without any help, mind you, from the little fat love god. Ruth has decided she herself is her one and only. And she’s in a comfy place. Why wouldn’t she be? No need to yell ‘Put the bloody toilet seat down!’ No need to hoover toe-nail clippings off the carpet.

But then a silver-tongued Prince Charming fronts up in his shiny Merc and tickles her discarded, little-girl fantasies. He tells her their love is written in the stars.

It must be a misprint.

A romance with this particular PC is not so PC! Still …

Ruth’s life plays out more like ancient myth than fairytale. And what hot-blooded woman can resist forbidden fruit? There’s a problem, though. Ruth does not have a hot-blooded mum. Ruth has a pain-in-the-arse mum whose squawking disapproval cranks the taboo up a notch. All the more reason to take up with the stud! But it means taking on the harpy.

Tensions mount, and even Ruth’s man can’t protect her from the trash-talking voices in her head. It looks like he can’t muzzle his own either. When an earth-shattering revelation causes him to give her grief, it makes her feel like she’s dating her mother.

Taking the kind of advice she doles out to her readers is not so easy, and Ruth wonders if this love can survive. More to the point, is it worth the trouble?Ruth has survived plenty with the help of her friends. And as a writer, her wry wit, dirty muse, and a bent for ancient mythology have sustained her. This, though, might be her undoing.

In my review of the first book in this series, Odyssey in a Teacup, I wrote:

The hallmark of a great writer is their ability to make their characters, the situations they find themselves in, and the feelings they experience, entirely relatable for the reader.

Paula Houseman did it then and does it now. Sometimes in a series, the author’s writing dips and we are not as wowed by the second book as we are the first, not so here. The author has presented us with another laugh-out-loud, face-achingly funny, exploration of family and relationships. It’s the same Ruth; lewd and immature, crass and self-conscious, strong and insecure, she stumbles through life, dealing with whatever drama comes her way, with her usual style and bravura.

In this novel, we have moved forward, and as in real life, the old makes way for the new, and so we have fresh characters to get our reading-teeth into. Various twists and turns present us with a dramatic production whose characters include Ralph as her new-love-man-of-her-dreams, teenagers filled with angst and issues, the neighbour from hell, as well as their respective idiosyncratic families and friends. As we are moved, from scene to scene, through the tragedies and comedies of their lives, and the revelation of secrets, Ruth discovers they have more skeletons than the local cemetery.

With a littering of births, marriages, and deaths, self-discovery and re-incarnation, with a wry look at the realities and craziness of  life, Paula Houseman entertains, amuses, and enlightens us. What I said of Odyssey in a Teacup is just as true here:

She writes with vigour and humour, giving the reader no time to excuse themselves from the reading room. Her highly comic and satirical look at Ruth’s (and Ralph’s) navigation through the minefield of their respective families and assorted relatives, is nothing short of brilliant. 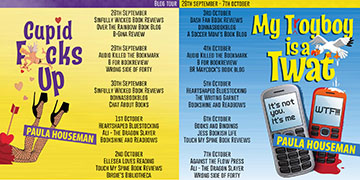 Paula Houseman was once a graphic designer. But when the temptation to include ‘the finger’ as part of a logo for a forward-moving women’s company proved too much, she knew it was time to give away design. Instead, she took up writing.

She found she was a natural with the double entendres (God knows she’d been in enough trouble as a child for dirty wordplay).

As a published writer of earthy chick lit and romantic comedy, Paula gets to bend, twist, stretch and juice up universal experiences to shape reality the way she wants it, even if it is only in books. But at the same time, she can make it more real, so that her readers feel part of the sisterhood. Or brotherhood (realness has nothing to do with gender).

Through her books, Paula also wants to help the reader escape into life and love’s comic relief. And who doesn’t need to sometimes?

Her style is a tad Monty Pythonesque because she adores satire. It helps defuse all those gaffes and thoughts that no one is too proud of.

Paula lives in Sydney, Australia with her husband. No other creatures. The kids have flown the nest and the dogs are long gone.

Brought to you via

I want one of these! I’d make one if only I could find a damned pattern! 😢 #militaryuniform #historicalfashion #sewing #peninsularwar #help
When I read “could care less” when it should be “COULDN’T care less’ or when people pronounce schedule as “skedule” when it’s “shedule”.
Today this book broke me 😢💔😘❤️ #goodread #greatbook #heartache #romance #emotional #love #historical #historicalromance
My dream library 💋
Isle of Lewis, The Hebrides ❤️
TBR