Recently I’ve been unwell. It started off with food-poisoning-like rushes to the loo to be sick, wobbly legs, aching muscles, and so forth, which morphed into days of evil, brain-mushing migraines and overwhelming nausea. Yes, its been fun. I’ve barely been able to raise a glass to my lips, never mind operating my iPhone.

As I lay on my sick-bed, contemplating life, the universe, and what the hell had I eaten? –  my phone became increasingly busy, insistent on gaining my attention..

Now at this juncture I should point out that I have a ‘thing’ about my much adored iPhone, or more accurately, the access it gives others to me. I use it for everything from

calls, texts, and emails, to shopping, reading, writing, and ordering take-aways. I’m normally quite responsive to calls, unless I’m busy with other things. Don’t expect me to respond if I’m at the Record Office, for example, you’ll have to wait until I emerge back into the 21st century. I spend a lot of time in archives, as well as writing and researching online at home, so the phone is always on silent. It is set to vibrate or buzz when contact is made, however I need to be close enough to hear it.

There’s the rub, because while I am addicted to using it, I am NOT addicted to being available on it 24/7.  Quite apart from the history work, I also want to relax without interruption. I’ve earned that right through years of bringing up my children while Mr Heartshaped marched around the world with the British Army. Alone with two small vomiting children in the early hours of the morning is not funny. Time to read doesn’t exist. Sleep was constantly craved. So it has taken me years, nay, decades, to learn to ignore calls. It all started before the advent of mobiles phones, when family meals or watching videos with my children (yes that long ago), or my very precious reading time after they were in bed, was ruined by persistent telephone callers. Ignoring isn’t an option when the caller knows Mr Heartshaped is away so you MUST be at home. In desperation, I acquired an answer-machine. Ha!

Of course, important and urgent calls were dealt with ASAP. 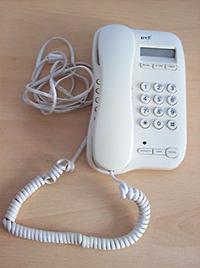 So, back to my sick-bed and my busy, buzzy, iPhone

I received constant demands for my attention even though people had been told I was too ill to speak or to deal with them. Mr Heartshaped stuffed the phone into my bedside drawer whilst muttering rude words about idiots who’ve been told I’m ill.

I could still hear it buzz and vibrate. He switched it off.

When I was compos mentis enough to read the messages, I was dismayed and then angry at what I found. They were all from a very small number of people, and the content gradually moved from “sorry to hear you’re ill but…”, through “I hate to disturb you when you’re ill but I really need” to “you could at least acknowledge my message”. The demanding flowed over from solicitous into sarcastic,  passive aggressive, and in some cases just plain out-and-out aggression. Why?

Nursing a migraine today, I distracted myself by trying to think about it. I decided that these people shouldn’t be allowed to operate communication technology. There should be a law. I shall contact my MP. (Eldest Offspring suggests I wait until the hefty dose of painkillers have worn off and review the situation. She’s always been sensible.)

I love the Internet. We have been connected almost constantly (house moves aside) since about 1992. Oh, how I fondly remember the days of CompuServe. The electronic banshee cries as the 386 computer screams to get connected. The excitement of the page downloading.

So slowly. You could go to the loo, wash your hands, make tea and toast, and get back to your computer before the bottom quarter of the page appeared. Yet it was all so new, so cutting edge, so exciting, and

we now have phones with more ‘power’ than the computers used to get the men to the moon. We have wi-fi access all over the UK; in shops, cafes, restaurants, the street, almost anywhere we go. Once connected we are instantly available to talk to our friends no matter where in the world they are, so long as they have access too. No hanging around waiting and waiting for letters and postcards; just send an email. No worrying if November is too late to send the Christmas cards to family in Australia or New Zealand; send an e-card. No waiting inordinately long periods of time for replies from banks, the utility companies, et al. It’s all texted, emailed, WhatsApped, Facebooked, Messaged….ad lib, ad nausea. I love it.  I have a couple of friends in remote parts of our planet with whom I’d be lucky to exchange half a dozen letters a year. Today I can keep in touch on a daily basis, see photos within hours, and enjoy electronic conversations about all manner of topics. It’s a such a massive boon. Thank you internet.

But back to my sickbed.

The downside is that people believe you should be available to them 24/7. There is no let up; no escape from unrelenting communication. This includes bosses who are outraged when employees don’t respond outside working hours. 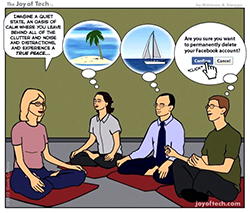 It doesn’t surprise me that more and more people are going ‘off grid’. This expectation of instant availability results in deep frustration for the message sender, but great irritability for the person who is being contacted in their ‘down time’. The notion that because we have this technology, we should be attached to it hip and thigh, all the time, even in the middle of the night, is ridiculous. My phone is also my alarm clock, but I do NOT appreciate a barrage of texts at 3 o’clock in the morning. Or in the middle of my dinner. Or when… well, you get the picture. This culture of ‘how dare you ignore me’ is rife, ignoring it is my stand against the unrelenting invasion of my peace and quiet, the time I spend reading, or time with my family.

As for those people who were selfish enough to bombard me with texts and emails whilst I was sick check your ‘Friend’ status, or WhatsApp. Today I deleted about 80 texts, and more than a dozen WhatsApp ‘chats’. NONE were important.  The senders will know who they are because I have blocked or unfriended them.

No wars were declared.

Your life didn’t collapse around you because I didn’t answer when you wanted me too.

Life is too short to put up with that kind of selfish nonsense.

Jacqueline Wilson’s most famous character is making a comeback. Tracy Beaker returns as an adult, a single mum with a daughter called Jess. It is from Jess’s perspective that the book is written.

To be honest, I’m not sure how I feel about this; I am in equal measures

excited, appalled, and curious. Tracy Beaker and Jacqueline Wilson’s books were a huge part of my daughter’s reading life. Even in throughout her teens, publication of a new Jacqueline Wilson book meant  had to bring one home for her. I think she read the last one just before she went of to university. When I told her of the project, her response was that she is unsure, it’s weird, but she’d probably read it if only to see what its like.

Claire Armitstead doesn’t like the idea, nor the fact that Raymond Briggs’ Snowman is being turned into a chapter book , albeit written by the great Michael Morpurgo. (Click on her name to read the article)

For International Women’s Day, Waterstones has given over its website front page to female authors. This is welcome, but it’s far from enough

I was blown away by the statistics in this article by Danuta Kean, and heartbroken by them as well. While women dominate book buying and book rating in the UK, men dominate both the books being reviewed as well as the reviewers. Kean asks if that matters, and gives the answer.

It’s sad that one genre that is dominated by female authors – Romance – is one that is mocked and sneered at in a way that men’s books aren’t. We have ‘chicklit‘ but not ‘blokelit‘, and ‘women’s fiction‘ but not ‘men’s fiction‘. Why is that?

Any way. Do read the article, it very enlightening and informing.